Going back to my childhood, I have always been a scientifically-minded person. I would consider myself as a “rock turner”. That is to say, a person who questions everything and who has a general curiosity about how things work. I spent my formative years dismantling all remote controls, telephones, and toys within my sight. My curiosity was often the source of many disciplinary actions at home and at school.

I think my initial interest in engineering and technology can be attributed to the era in which I grew up. I had the fortune of witnessing some of the greatest cartoons ever made including the original Transformers, Thundercats, Voltron and Robotech, to name a few. That love of science was further reinforced and cultivated by members of my family, particularly my parents, my grandfather and my cousin.

My grandfather was a huge fan of science fiction films and televisions series, and I would sit with him watching Star Trek reruns which helped spark my fascination with technology. My father was the owner/operator of an electronics repair shop. I would often watch (and sometimes assist) him as he repaired VCRs, stereos and tvs. I didn’t quite grasp the concepts at the time, but that early exposure to circuits, resistors, transistors, etc., all made sense years later when studying physics and engineering. My mother was an avid reader who always encouraged me to read and study history. Learning about individuals such as Garret Morgan, Lewis Latimer, Elijah McCoy, and Granville Woods, and their positive contributions to society inspired me and further steered me towards engineering. But as the owner of an architecture/engineering firm in Atlanta, my cousin was probably the biggest influence to pursue engineering. He encouraged me to become an engineer since I was a teenager and has served as a great mentor over the years.

With all of the various influences I believe that my career path was pretty much chosen for me. It was solidified through my choices for school which started with George Washington Carver High School of Engineering and Science, a STEM-based magnet school; included a short enrollment in the pre-engineering program at Lincoln University; before completing general courses at the Community College of Philadelphia. It was there that I realized I had developed some poor academic habits and learned to embrace my inner nerd and be a successful student. I enjoyed turning those challenges into strengths while mastering a difficult curriculum and successfully graduating.

My educational journey concluded with enrollment at the University of Delaware, where I chose to major in electrical engineering because I believed it to be the most challenging. My experience at the University of Delaware was awesome. I was fortunate enough to learn and study under some of best professors in the nation and I got to take part in cutting-edge research that was being conducted at the university. In fact, one of my many professors was John G. Elias. If that name doesn’t register, take a few moments to do a quick search on the internet. 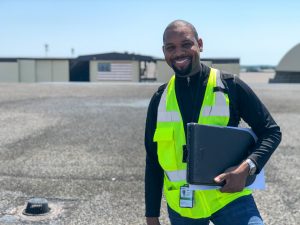 After graduating from the University of Delaware, I was fortunate to immediately find employment as an electrical engineer. I have worked for many years at several architecture/engineering (AE) firms, but in 2016, I was presented with an opportunity to join Summer Consultants and to help grow the newly established Metropolitan Philadelphia Regional Office. I would say my decision to join Summer Consultants was one of the best decisions that I have ever made in my life. My experience at Summer Consultants has been amazing, and it’s still just getting started. I am grateful to be at a company with such a family atmosphere and everyone is treated as a valued member of the team. The projects are unique, diverse, and challenging, where you learn something new every day.

There have been a few bumps in the road along the way but I am extremely grateful for all of my many experiences and lessons learned. Overall, I received a top-notch education, valuable life skills, and a great foundation, all of which are necessary for a successful career in engineering.