Home | From the field | A Case for Round Ductwork

A Case for Round Ductwork 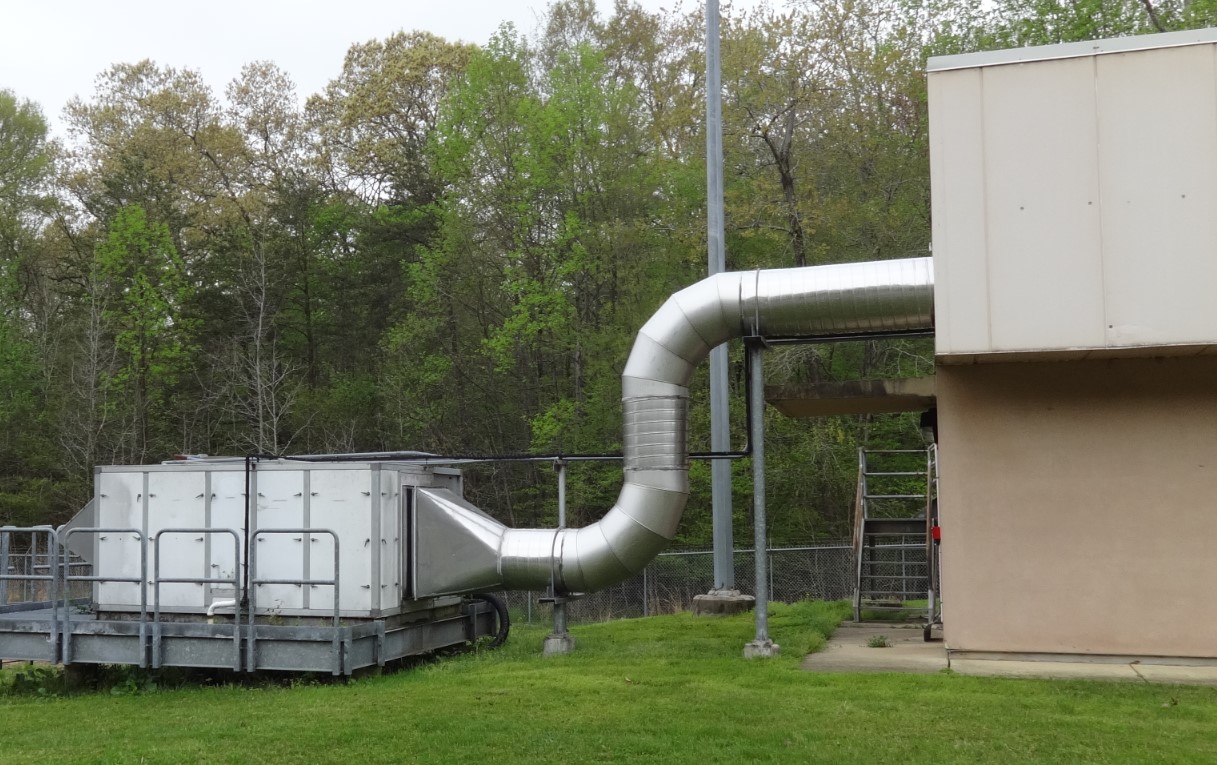 Rectangular ductwork has traditionally been used for HVAC renovation projects, especially for interior ductwork. Of late, round ductwork is being considered more as an option for external ductwork use, in the right conditions. Recently, when renovating multiple buildings as part of a single project, it became apparent that long runs of external ductwork should be round more often than not. For this particular project, the ductwork was being replaced to accommodate completely new HVAC systems that are required to maintain specific conditions within each building. While rectangular ductwork was used with the existing system, the advantages and potential cost benefits described below, resulted in the design of round duct as a the preferred replacement option.

Fluid flow is optimized when it is allowed to take the path of least resistance. In HVAC system design, the resistance of fluid flow is measured as static pressure and was a major consideration in duct selection type especially when it comes to providing a system with significant branch take offs and fittings as this one was. Increased static pressure translates to higher motor loads which means higher horsepower motors that require more energy to operate. Rectangular edges and corners add additional static losses, while smooth, round shapes, such as tubes and elbows, are more favorable to flow. They inherently optimize delivery of fluid by offering the least amount of resistance to a fluid’s path, resulting in lower motor loads and reduced energy needs for the client.

External ductwork requires a heavier joint type than internal ductwork (i.e. welded companion flanges that are bolted and gasketed). Lateral joints of rectangular duct are major points of weakness over round’s longitudinal joints. Round ductwork also typically has fewer joints than traditional rectangular ducts, which results in more rigid ductwork with fewer points of failure. This means less bracing and supports are required, reducing material costs. In some cases, support spacing distance can be increased with a more rigid duct.

Exterior HVAC systems and ductwork should typically last as long as interior systems, even while experiencing many forces and conditions that interior systems and ducts do not. Wind, rain, snow, and ice are all factors that may affect exterior ductwork, depending on the region, and all of which are considerations for this particular project at some point during a year. Flat vertical surfaces will experience more effects from the elements than round due to the larger surface area provided, and could be more susceptible to deterioration due to extended exposure to moisture. With less surface area and limited flat surfaces, round ductwork  is exposed to external conditions less which can result in a longer material life span.

Exterior ducts require a base level of insulation to minimize heat losses and/or gains. Rectangular ducts, however, must be provided with additional insulation to build up the top side horizontal flat surface to create a slope, in order to divert moisture and avoid ponding. Because round ductwork has very little flat surface, no additional insulation is required to divert moisture. This again results in less required materials which can potentially reduce project costs. 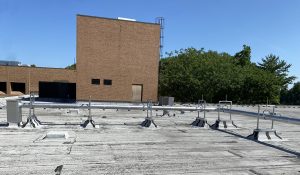 Round ductwork isn’t perfect for every situation. Smooth, round shapes require a larger footprint and additional space. Round splits are also less commonly used than a traditional rectangular dovetail, and round elbows require more space to install and are not as conducive to tighter conditions. Rectangular fittings require less space to make transitions and turns and are more advantageous for limited spaces. For this particular project, because the location of the equipment allowed for longer, straight runs and enough room for transitions, space was not a factor in deciding between round and rectangular duct.

Rectangular ductwork also has potentially less upfront cost than round. Rectangular duct is shipped to a construction site in two L-shaped pieces and snapped/secured together on site by the contractor. Round duct is produced at the factory and shipped in longer, straighter lengths, which can result in higher upfront costs. However, because the round duct has fewer joints, there is less on-site construction which is often less costly for the contractor.

In conclusion, there are many things to be considered when designing air systems. With regard to ductwork, recent experience has shown that for larger projects with longer runs, fewer taps and extensive outdoor installation, round ductwork should be seriously considered and discussed with your client. The Sheet Metal and Air Conditioning Contractors’ National Association (SMACNA) also offers resources and technical guidance to efficiently design and support ductwork, including a technical bulletin discussing round and rectangular duct for use in rooftop projects. Though there may be some additional work during the design process, the cumulative benefit of round ductwork may result in an overall lower cost and greater long-term value than rectangular ductwork for a project.